The perennial question: What shall I use for wargames boards? 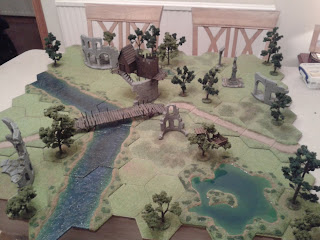 To some, the answer is a piece of cloth. To many of us its about what we can fit on our dining table. To the elite few its a custom built piece of furniture in a room dedicated to gaming.  Now, we may all dream of the latter, but I suspect most of us are caught somewhere between the other two options.

And I've tried my hand at all the options I can think of over the years.  There was the 4'x2' piece of chipboard with chicken wire mesh hillside I had in my bedroom as a teenager.  Then there was the large sheet of material I would drape over the dining table for larger games.   I seem to remember stacking a lot of books for hill contours underneath it and try and ignore all the ugly folds in the material.  Then there was the two 4'x3' pieces of plywood that I covered in railway static grass mat.  You know the stuff - green flock stuck to what looked like green parcel paper.  Of course, I use the verb 'stuck' in the loosest possible sense.  If I wasn't taking chunks of plaster out of the wall trying to manoeuver the blooming things, I was followed by a mist of static grass that seemed to fly off the surface every time I looked at them.

I wanted something more realistic.  So I went for modular terrain boards, where the roads and rivers were sunk in to the terrain, where every inch was covered in layer upon layer of woordland scenics foam, flock and foliage.  And didn't they look lovely.  But 18mm deep mdf edged with wood, filled with expanded polystyrene and covered in plaster-impregnated cloth weighs a ton. And my dining table eventually couldn't bear it any longer.  Great excuse for a lovely new set of dining room furniature, but an instant killer of a gaming budget.  And if like me you have to keep everything in the loft, they just about ripped your arms off in the process.

So I did what everyone else dos in these situations.  I got one of those supposed miracle gaming mats from Antnocities Workshop.  Looked okay.  Lasted a month.  Why?  Because the blessed thing was thick and durable.  Which means that it won't fold naturally over the edge of a table.  So you reach for your dice to determine a round of combat, only to inadvertently catch a corner.  This would make the miniature's world fly off its axis by approximately 35 degrees and dump a flanking unit onto the floor.  Not a pretty sight.   The solution was to put a couple of 4'x3' boards between the table top and the mat.  But I'd been there before... 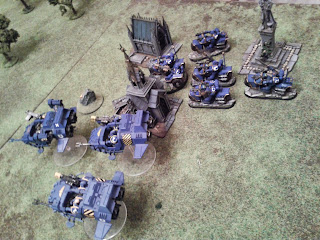 And then I got some old gaming group's 2'x2' 2" thick polystyrene boards covered in static flock.  They were light, so the new table was happy.  They did the job.  They needed some tlc in the form of more flocking, but I thought it was worth the effort.  So we got to game.  But they dent when you look at them, least of all when you pick them up.  And if you have to keep them in the Garage (my loft is obviously too full of useless gaming boards) then they try and take off if there's so much as a breath of wind about.  And if you live on the north-east coast of Scotland, the one thing you're guaranteed on a daily basis is wind. 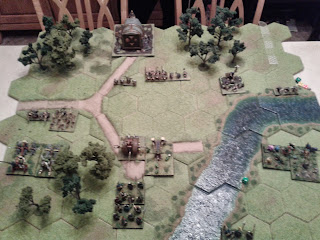 And then I tried some of the Hexon terrain boards.  I'll admit that I was initially skeptical. Would the hexes be all I'd see?  In all my years of wargaming I've never played a hex based system so I couldn't see the point.  But you hardly notice them.  And they stack up into boxes small enough to fit in a cupboard shelf.  No traipsing through the Scottish elements to get ready for a game!  And the drop-on scenery they make for the boards doesn't warp.  So you don't need 9mm high rivers!  And they hardly shed anything.  And the hexes are great for defining the edges of difficult ground such as woodland or rocky terrain. And you can have thousands of different board configurations without needing thousands of different modular terrain boards. Which keeps our better halfs happy. 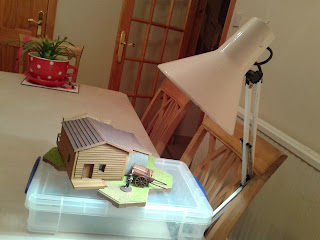 Hexon Terrain.  It may not be to everyone's cup of tea.  But after thirty years of wargaming, I'm sold.  In fact, I'm ordering another set for my Old West Wargaming.  And ATZ. And Nuts!  And pretty much everything else I game...
Labels: Wargames Boards Wargames Terrain Woodland Scenics
Location: Aberdeen, Aberdeen City, UK