Okay. Confession time. They say its good for the soul! I'm actually quite nervous about painting the buildings. They look great as they are. Their final appearance will be determined by the paint job they now receive.  I know that's true of every miniature we choose to game with. But it quite often sets my nerves on edge. Let me try and explain why...
If you're of the same generation as myself, you'll remember the Citadel Journal. At that time is was pretty much the only way to get dedicated articles on miniatures and making scenery. I still have issue 2. Minus the cover. You had to cut it up to get all the card figures you needed for the battle scenario. I distinctly remember it had hobgoblins in it. Lots of them. But I digress.
The painting articles in that publication talked about leaving a thin line of black between each colour. This was done on buildings and minis alike. This was to make the model readable at arms length, as they would be seen on your gaming table. You'd never do it now, and you'd never make it to a Gold Demon competition with that style.
However, its ghost looms large in my memory.
And then there's those model railways. Proper railway scenery blurs the line between model and miniature. Using the correct painting techniques, you can make buildings that look awesome. Until you put your little lead men next to them. They don't mesh. And its all because of the different painting methods. And that's where my dilema comes in.
I want these wild west buildings to look good with my lead men. Which means I can't paint them the same as I would for a model railway. Even though I only use Woodland Scenics on my gaming tables, scenery and bases. This is perfectly logical as its a fantastic product which remains colourfast.
I think its an issue between realistic and artificial colours. What wins at international miniature painting competitions isn't realistic. The shadows are heightened. The palette is dynamic and suggestive rather than accurate. Its a painters paradise where winners are announced because of the grain they have painted on a spear shaft or musket butt. Doesn't matter if the grain wouldn't be visible unless your face was 6" away from it. Doesn't matter if its in entirely the wrong colour of wood. And don't even get me started on rocks, which according to miniature painters are apparently uniformly grey. This is all because of one simple fact. It's the effect that matters.
It's all in the eyes.
What do I mean? Well, there was a time when I painted the eyes of my miniatures. Often it worked. Even if it took hours. The danger though was the spaced and staring eye look to a figure. Nowadays I don't bother. You can see that on my painted minis in other posts. I don't do it because you can't make out someones eyes at a distance. You need to be relatively close. And if they're really smiling at you, the eyes are hardest to see. So I don't paint them any more. And although the purist is probably screaming about the eye being the gateway to the soul, please remember two things. Firstly, you only really notice badly painted eyes on the gaming surface. Secondly, they're made of lead or plastic. They don't have souls. Move on!
So what am I going to do? Simple. Have a go and see what happens. Force shadows so that the models look good from a gaming distance. But not so much that they look naff close up. Here's the work so far on the first building. What do you think? 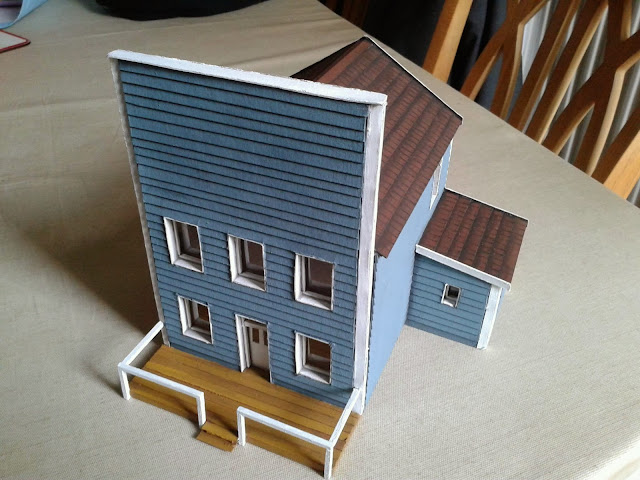 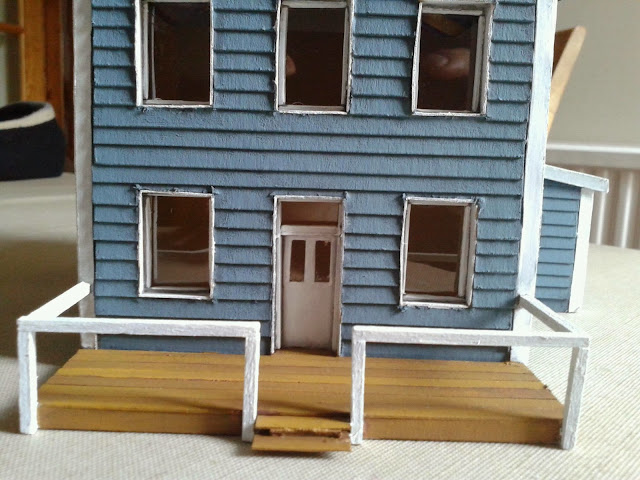 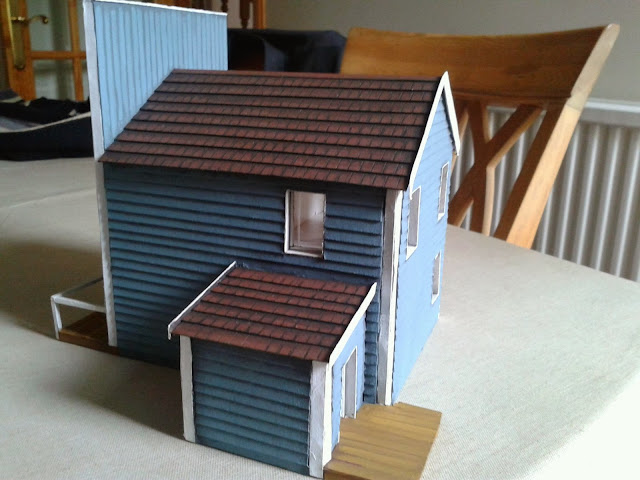